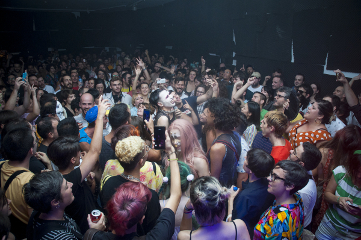 Since ten years ago the Autoplacer/Sindicalistas collective has been promoting self-published music and independent music processes. Over the last year it has carried out various activities to celebrate its tenth anniversary, which reaches its climax at CA2M Centro de Arte Dos de Mayo with the Autoplacer Festival 2019 10th Anniversary. An event not to be missed which will once again transform the museum’s exhibition halls into concert halls. Twelve hours of non-stop live music featuring ten groups and five DJ collectives who have taken part in some of the previous nine annual events, and who will be returning to meet up again with the museum, with Móstoles and with the public.

Alarido Mongólico. Formed in 2009 this group from Galicia is back again with a purpose: to take to another level a career already dotted with viral hits and collaborations with artists like the designer David Delfín or the film director Marçal Forés.

Alberto Acinas. A stalwart of the Spanish underground scene and a standard-bearer of reinterpreted folklore from the north of Spain from a contemporary optic close to punk, Alberto Acinas is presenting his latest album, Puntiagudo, released this September, live.

Caliza. Since being short-listed for the Autoplacer competition in 2014, Caliza has recorded two albums, Medianoche/Mediodía and Mar de cristal, and performed live alongside such disparate groups as Molly Nilsson, Cate Le Bon and Ataque de Caspa.

Doppeltgänger. Duo dedicated to the cold wave, the no-wave and minimalist and instrumental synth-punk.

John Grvy. Retrofuturist crooner on the busy crossroads between R&B, electronica, neo-soul and African roots. This eclecticism is readily evinced in G R I S, his latest mixtape, with stellar collaborations from Javiera Mena, Yung Beef and Brisa Fenoy.

Juanita y Los Feos. After ten years on the go Juanita y Los Feos bid farewell to music in summer 2015 after a tour of USA and Mexico. The band, key players in Spanish new wave punk, have risen from their grave to spend one more night partying.

Lorena Álvarez. Since she won the first edition of the Autoplacer competition back in 2010, until the recent release of her fourth album, Lorena’s career has overstepped the boundaries of traditional music thanks to her boundless creative imagination.

Ojo Último. Electronic bases mixed with elements of philosophy, psychology, politics, science and mythology to unfold a psychedelic universe and open up a door to a fascinating, crazy and incredibly addictive cosmos.

Salfumán. Sandra Rapulp’s handcrafted electronic pop is back with its signature sound, oscillating between synth-pop and ambient, strongly influenced by disco, R&B and 80s sounds. Impossible to pigeonhole in a single bit.

VVV. The winners of the Autoplacer competition in 2017 are back again with their euphoric and pessimist sound, caught between synth-pop and happy hardcore, to present us with their second album.

Abismal. Slvj (Salvaje) is a music producer, experienced MC and DJ from Madrid, who set up the Abismal project in 2010 with the intention of fusing experimental music with the visual and performing arts.

a_mal_gam_a. Made up by Diskoan and Josephine’s Soundscapes, the group works constantly with creators and music promotors far removed from ruling canons.

Caballito. Caballito is the name under which the DJs and producers Bigote and Grita operate, pioneers in Spain of the new tropical wave. It’s also the name of their label which promotes eclecticism based on good vibes and itchy feet.

Femur. Aitor Arch, a key DJ in Madrid’s underground electronic scene, set up Femur in 2011, as a party night and a record label focused on vintage electronic sounds.

Valle Eléctrico. Valle Eléctrico started off as a platform promoting the synthesizer with an epicentre in synth-pop. His DJ set alternates new urban movements with futurist combinations of glitch-hop, dancehall, alternative R&B and uncompromising pop.

With the support of: