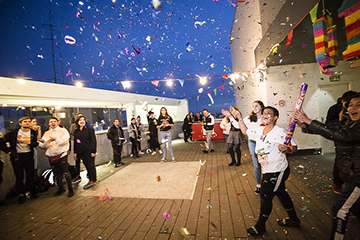 Located in the city of Móstoles, CA2M (Centro de Arte Dos de Mayo) opened its doors on 2 May 2008. Since then, it has hosted over 70 exhibitions and doubled the number of visitors. Currently directed by Manuel Segade, the art centre has staked out a position for itself in Spain as one of the forerunners in articulating narratives on artistic contemporaneity and it is now recognised as a benchmark in contemporary art in Spain. At the same time it has managed to integrate itself into the social fabric of its hometown and its surroundings thanks to its programme which is free and aimed at all kinds of audiences.

Its location in Móstoles is a key part of its identity, given that it has enabled it to question the complex definition of the metropolis and its role in contemporary culture. Its geopolitical position to the south of Madrid –with an immediate cultural catchment for over one million people and, in a wider radius, the five million inhabitants of the region in general– has helped to consolidate a space committed with innovative mediation strategies whose goal is to ensure that art fulfils its role in intellectually stimulating society and contemporary culture.

Over a period of several months, José Luis López Linares and the whole team at López-Li Films were directly involved in the day-to-day running of the art centre, speaking with members of staff, with artists and with the visiting public, with a view to rendering a polyhedral vision of the institution in this short auteur documentary which evinces the social and cultural transformation brought about by CA2M.

The short received funding from Madrid en Corto, a programme promoted by the Department of Culture, Tourism and Sports of the Region of Madrid and run by ECAM Distribución whose mission is to support the national and international distribution of shorts produced in the Region of Madrid.