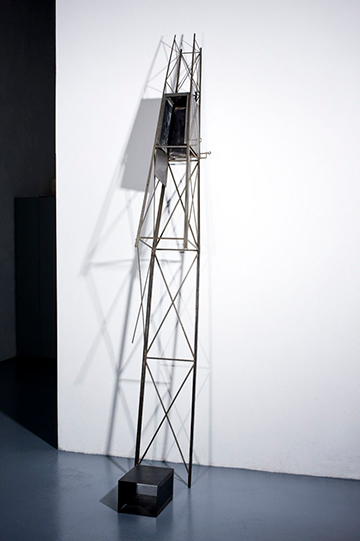 REASON FOR INTERVENTION
The sculpture under study is a metallic structure redolent of a truncated asymmetrical elevator.
The major concern was the deterioration of the asymmetrical structure caused primarily by its design, dimensions and the interplay of the different volumes and weights. This is further accentuated by the exhibition system, with its oblique inclination with respect to the wall and the fact that there are only two points of contact on which the work is supported.

STATE OF CONSERVATION
Some structural damage was observed in terms of deformation and damage to the material as well as active points of oxidation. The work was also affected by superficial damage in terms of accumulated dirt, environmental pollution, alteration of the layers of protection with whitish wax residues, losses, knocks and erosion.

TREATMENT UNDERTAKEN
After an initial cleaning of the whole sculpture, the deformations of the cross bracing were remedied.
Loose pieces were affixed with cold-welding using epoxy resins.
To strengthen the structure and provide the sculpture with greater stability, the system of anchoring the work was replaced and reinforced.
The treatment was concluded with the application of a final layer of protection.