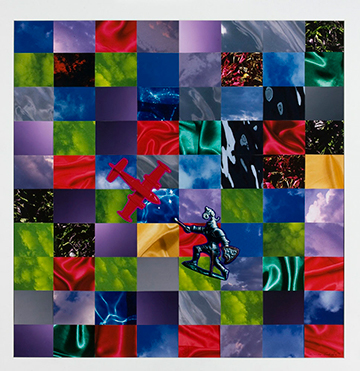 The decision to restore this work was taken following an application for the loan of the work for Diccionario incompleto de la fotografía española. CA2M Collection, an upcoming exhibition at Centro Oscar Niemeyer in Avilés and the poor state of conservation of the photocollage.

This piece is in the middle of the process of restoration, currently interrupted due to the state of emergency.
The montage of the photocollage was being changed due to the inadequate materials for a correct conservation of the work, given that the back of the MDF board and the adhesives used to support the work were transmitting acidity to the original elements.

After first dismounting the work, we proceeded to eliminate all elements harmful for its correct conservation, although it was impossible to remove the cardboard on which the photos were adhered, as this was the original montage by the artist.
Remains of adhesive from sellotape and double-sided tape were removed with the aid of a hot air gun and various kinds of erasers.
Afterwards the front surface of the photographs was cleaned, eliminating fingerprints and any remains of adhesive as far as possible.
The work was then mounted again, adhering the photos lightly and fixing the work as a whole to a passe-partout folder with strips of Japanese paper.