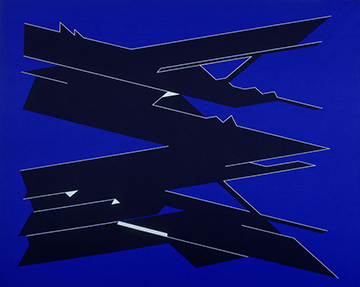 REASON FOR INTERVENTION
This work, a large format oil-on-canvas painting, was in need of restoration. As a consequence of a series of movements prior to entering the collection, the layer of paint had been adversely affected. Given the delicacy and the matte quality of the paint, the alterations were particularly visible and detracted from its appearance.

STATE OF CONSERVATION
Alterations in the support, deformations, damage to the layer of paint, surface dirt, fingerprints, erosion, losses of paint which reveal the underlying priming layer, and previous retouches which had altered the tone of the colour.

TREATMENT UNDERTAKEN
The intervention in the support consisted in eliminating the deformations caused by corner draws and loss of tension in the stretcher frame, with a risk of the linen fabric tearing in the corners. The original black perimeter tape was replaced wherever missing.

All stains were removed as far as possible and the layer of paint was reintegrated, which proved the most complex part of the process given the texture of the work.