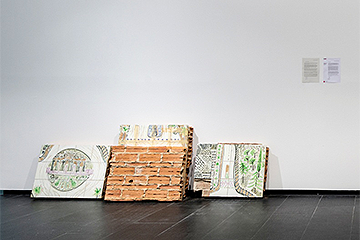 The installation consists of a mural, comprising four fragments, made by Manuel S. Molezún in 1958, and recovered by Patricia Esquivias in 2016. Located in one of the balconies intervened by Manuel S. Molezún in a building on Paseo de la Castellana in Madrid, it was removed and donated to CA2M by the artist, which was the reason for the intervention.

Following an organoleptic examination of the pieces, it was ascertained that the state of conservation was less then optimum.
Both the support (brick and cement) as well as the ceramic tiles had deteriorated due to the location of the work outdoors, in contact with pollution and changing weather conditions like rain, wind and contrasts of heat and cold.
Once the mural was removed, with the tiles having been previously fixed with adhesive tape to avoid any of them falling off, part of the cement mortar was disaggregated which deteriorated the adhesiveness between it and the tiles and affected the visibility and integrity of the work.

The restoration was started with a process of surface cleaning where possible.
The consolidation of the support, the mural, and the fixation or adhesion of the tiles together with the elimination of the adhesives used during the phase of removal were the most delicate tasks.
Afterwards, the volumetric and chromatic reintegration of the tiles was undertaken.
As the final phase of the intervention, grout was added to recover the work’s original aesthetic and then finally a layer of protection was applied.