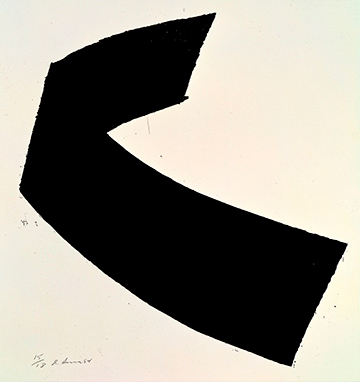 REASON FOR INTERVENTION
When they were left on deposit in the Fundación Arco Collection at CA2M in 2014, conservation reports were drawn up on the works by Richard Serra, which are all individual pieces and not a triptych. It was immediately apparent that they all required restoration to prevent future problems in conservation.

The main reason for intervention was the noticeable damage, partly due to inadequate mounting. It is probable that when they were framed the oil had not completely dried, thus explaining why part of the paint had stuck to the perspex.

STATE OF CONSERVATION
The damage suffered was common to all the works: alterations in the layer of paint in terms of texture, lustre, surface dirt, damp stains on the bottom part, residue of oxidised adhesives, fingerprints on the white parts of the paper, and, more significantly, loss of adhesion between the layers of mounting (deformations, folds and blisters).

TREATMENT UNDERTAKEN
After dismounting the works, the surfaces were cleaned using soft brushes and gentle vacuuming. The stains were treated chemically or mechanically, depending on their origin. The adhesion between layers, blisters, were subject to different conservation criteria, given the delicacy of the operation. Some of them did not adversely affect the visual appearance of the work and did not pose a problem in terms of conservation so it was decided to only treat the most visible ones. The intervention was concluded with the chromatic and volumetric reintegration in damaged areas of the rigid support.