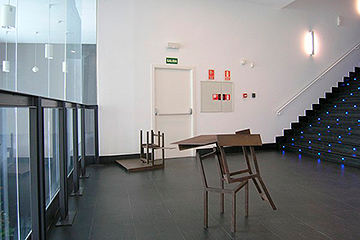 REASON FOR INTERVENTION
This work, consisting of two elements, was made for the exhibition Una obra para un espacio, held at Canal de Isabel II in Madrid in 1987. Afterwards the two elements were stored separately in different locations, until the work was deposited in the collection.

The materials of which the work is made are most often the cause of alterations and/or deterioration. The reason for this intervention is the aging of the constituent materials, exasperated by exposure to inappropriate climatic factors at some period of time.

STATE OF CONSERVATION
The state of conservation of the two elements differed from one another. In the catalogue for the exhibition, the artist stated that he uses different kinds of material in making his works, perhaps insinuating that they would behave differently in the future, with the passing of time. The loss of patina and accumulated rust are the most notable alterations.

TREATMENT UNDERTAKEN
The aim of the restoration was to recover and unify the patina of the pieces. To this end, the elements were cleaned, after which a high percentage of the patina was uncovered. Inhibition of further corrosion was another main action.

The matte finish further underscores the different materials used, more saturated in the ‘A’ element than in the ‘K’.