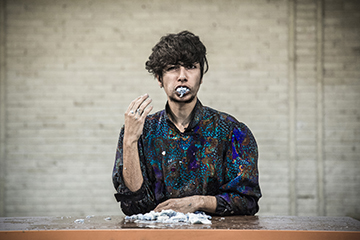 What happens when you grow up with a genderless neutral language and then arrive in a country in which everything is gendered? How can we speak of identity when a language has already determined what is masculine and feminine?

This is what the young Iranian artist Sorour Darabi was faced with when s/he arrived in Montpellier to study dance. Her/his mother language, Farsi, has no masculine or feminine forms. French, on the other hand, constantly forced him/her to distinguish between male and female, even in her/his search for his/her own language of movement. Accepting a word thus became a physical test.

Darabi rebelled against this violent form of authority. Farci.e (2016) is an androgynous solo show that flirts with the boundaries of gender, language and sexuality.

Los Teatros del Canal and CA2M are working together in a programme conceived to mark out a shared working space: the body understood as in permanent construction and, accordingly, in permanent conflict. For Sorour Darabi (Shiraz, Iran), the transition of his own body triggers a radical confrontation with the social body: transgender identity uncovers the power of language over bodies, but also the power of the body to threaten the conventions of language.

Sorour Darabi is a self-taught Iranian artist who lives and works in Paris. After working in the underground network in Iran, s/he went on to study at the Centre Chorégraphique National (CCN) in Montpellier, France.

With the support of: