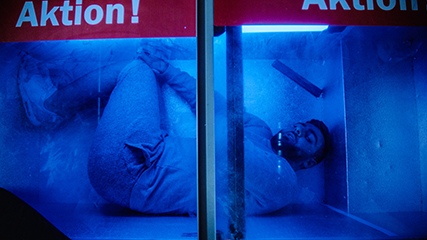 With the title The Films of…, we will get together to view the work of artists who use audiovisuals to speak about the here and now. There is no common theme as such between the different sessions, rather what unites them is a shared urgency to understand our surrounding world and its everyday effects on us inasmuch as inhabitants of techno-capitalism. In this proposal, there is also an intention to break away from the idea of a retrospective as the ultimate recognition of an artist’s long-standing career. The age of the artists is not important, nor the years that they have been working, nor the number of films they have made. What really interests us is that they share their working processes with us, their first and last films, their doubts and working methods.

Since 2014, the year they started their artistic and sentimental relationship, Jorge and Guillermo have been searching for themselves in images and in sounds. Their films are crossed journeys, their own and other people’s diaries full of repeated paragraphs and blank sheets. Guillermo’s body, always in front of the camera, is more of a container than a character, sometimes it is just a gesture, other times it is possessed by Jorge and then we have no idea who or what is speaking to us. Both of them, and also what they create, like to caress plants, wet their hands and invoke ghosts. The three feature-length films they have made to date (and this is the first time that all three can be seen together in one session), invite us to feel the form, to break the causality proper to narrative film and to find them/ourselves in the physicity of light and in phonemes.

The image as possibility, the pixel made flesh, stone and tree trunk. Poison. The films of Mar Reykjavik speak to us of what is not seen, of the in-between, and the power to generate new meanings by annihilating the image. She says that “poison does not kill but contemplates death in things in order to give them new meanings”. Accordingly, bodies become metallic supports and stands, and the stones emotional anchors. In her work there is a certain obsession with embodying the digital, like a desire to condense times, places and materials in search of the total image. A representation that is imitable for everybody; people, objects, animals and everything that breathes between one and the other. Sometimes her films are screened, but nearly always they move and perform themselves. This time three of them will coexist in the same space and it will be our bodies that move to view them on a path at times guided, at times suspended.

Film, in uppercase, has often addressed landscape throughout the course of History, subjecting it to a romantic view and the ideology of the person recording it. Very often, almost always, the subject behind the camera is a cis, white, heterosexual and middle class man. In other words, the representation of our surroundings and of the other-place, of those spatially and culturally distant landscapes, belongs to power. It is in this framework that Laura Huertas-Millán’s films offer us some salvation. They discover for us a whole multitude of fissures in this hegemonic representational system. These cracks are material and conceptual, even temporal. Ruins and virtual architecture are some of the tools that Huertas-Millán uses to perforate History, breaking it and opening room for other systematically erased stories.

There is ten years between Mario Pfeifer’s first and last films. Both of them speak to us of power and representation in contemporary Europe, although the social and political turbulences that have taken place during the last decade are enough to make Pfeifer’s language necessarily more explicit, for his images to give names and surnames to the xenophobia and violence systematically exercised by the West on its frontiers, in the mass media and in refugee camps. From the political implication of their gestures, agency and reproduction, to the re-enactment and mise en scène based on real events, Pfeifer’s works analyse migratory movements and the refugee crisis in Germany with aesthetic and narrative precision, uncovering the media technologies and the necropolitics of the victors.