MARTA FERNÁNDEZ CALVO. WITH THE COLLABORATION OF CAROLINA ALMARZA AND LUZ PICHEL PICHEL 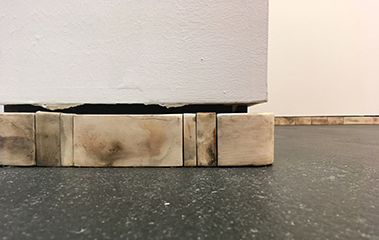 Last summer, a group of boats set sail from the port of Valparaíso. When they reached open sea, the crew tied the boats with ropes to keep them close together and to recite poetry. A while after the event it was believed that it was the bodies that were holding tightly onto one another with their hands, very close together, in concentric circles so that they would not separate and to keep upright. Caro says that the public held onto the poets so that they would not fall into the sea while reciting.

This summer the mothers died. This summer we burnt the mountains in Madrid and we smelled it all. We extracted its gases in order to incrust a galaxy into the museum in the ceramic skirting board that runs around a large part of the third floor. We dreamed of pouring ourselves into this gap in which the horizontal and the vertical are decided, to cross this edge and to slash open the museum and escape on a flying carpet or on a UFO.

Rodapié Universo (skirting board universe) is a trip to the final horizon; to the ocean, its views and its voices which we conjure up through the architecture of the museum.