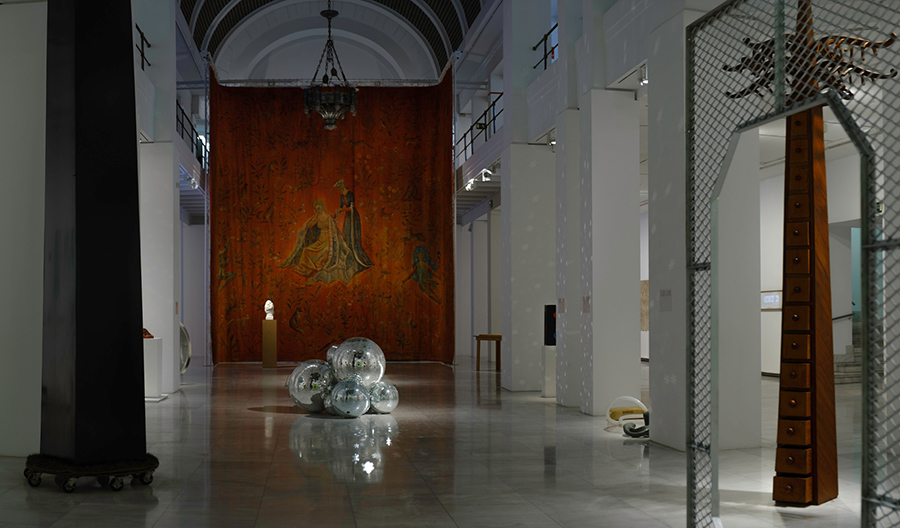 A collection encompasses the present continuous, past perfect and future perfect. The Centro de Arte Dos de Mayo houses the Contemporary Art Collection of the Autonomous Community of Madrid, now called the CA2M Collection, and the ARCO Foundation Collection. Both have been around since the eighties – the first since the approval of the Statute of Autonomy of 1983, and the second since the creation of the foundation in 1987 – but grew during the nineties, when there was a burst of narratives as a consequence of the fall of the Berlin Wall. The need for a chrono-political approach to show how the pieces that make up these collections refer to the policies of our time is a fundamental exercise. Regarding the teleological time frame of conventional history, and the usual production times needed, there are other secondary considerations, such as that of cultural workers, colonial flows, interpretations of gender, and regressive history that need to be taken into account. The collections must be disassociated from the market and must not involve any possible interpretations that are connected with the study of their own idiosyncrasies: how they have evolved, how they have grown, how they have been used and how they have travelled are necessary aspects of research – that the artistic practice itself and institutional criticism demand today – to construct sound futures for them. A collection is, together with the building that houses it, precisely the only part of an institution that is designed to endure, to survive the memory of its programmes: it is the part of the museum’s material culture that must be preserved as a common good.

In recent years, the development of critical museology has found in so-called critical histories of art a series of indispensable tools for working with collections. In parallel to the sophistication of the narratives of contemporary artists, new and complex narratives of collections have begun to be built from the inconclusive histories of contemporary culture itself. It is no longer enough to just collect, preserve, show and interpret, but it is also essential to re-frame and re-contextualise the pieces of a collection in light of the new artistic practices of today and to consider the relationship between museums and their visitors. In this way, aspects believed to be central are now under scrutiny, while other marginal ones become relevant stories for new generations, becoming a vernacular vision that renews the collection itself via its own alternative explanations.

A collection is also a situated practice. The CA2M Centro de Arte Dos de Mayo was set up as the first public institution in the Autonomous Community of Madrid specifically dedicated to contemporary art. It is this area of knowledge that the Collection must define based on its geopolitical position and conditioned by its material scope. The context of these past decades has been marked by massive migrations of people all over the world. In the case of the Region of Madrid, and in line with the socio-historical circumstances of Spanish colonial history, more than a third of new citizens come from Latin American countries. This mobility has increased in recent years: the global crisis, together with the economic and political uncertainty in much of the Southern Hemisphere, has increased the migration flow across broad social strata, affecting not only the labour market, but also our culture. It is also clear that the continuous economic and commercial exchange of resources, finance and business of the old city with its former colonies has defined the relationships of power of the second half of the twentieth century and, even of the start of the twenty-first century. All this goes hand in hand with a flow of models, productions and cultural goods that must be reflected, in particular, in the most contemporary art: objects are crystallisations of socio-historical relations of production; art cannot escape this definition and, therefore, the collection must be the situated voice of these new positions, of these relationalities that must determine new or divergent narrative structures.

When the two collections were combined in 2014, the fragmentation and incompleteness that inherently characterise a collection became manifest, but so did the importance of designing vectors stemming from their common framework, lines of growth that were also inexorably the sum of the forces of the intentions that both collections had when they were created. Since its deposit in a public institution (the Centro Galego de Arte Contemporánea) in the mid-1990s, the aim of the ARCO Foundation Collection was added to one of the CA2M’s recently created tasks: to make its own collection available to the public.

The CA2M’s mission as an institution is to bring contemporary art closer to society, but also to give meaning to it, and to promote and research local contemporary art by creating international networks that increase its presence abroad. Undoubtedly, this is much easier to do thanks to the international aspect of acquisitions at the fair, which serves to enhance it, but also enables the institution to make the story about the present situation of art in Madrid more complex, placing it in a broader context. In other words, it affirms the fundamental importance that Latin American art has on the construction of the ‘selective tradition’ that has defined contemporary art in Spain in recent decades. This definition and the establishment of the genealogy that qualifies it is a task to which the CA2M specifically contributes from a peripheral geopolitical position: the same speech pattern that has created the narratives that have shaped a rereading of recent art history in the more global and inclusive, in short, more critical international context.

The way to introduce the museum to new visitors is to promote its changing possibilities, to lift the collections out of their circularity: exhibitions are not simple statements, but questions and the answers must therefore be multi-faceted and have various voices. A feature of contemporary tradition is that good works of art always exceed the limits of their own epistemological framework. Via their political and aesthetic positions, through their formal choices and their discursive capacity, they themselves broaden the definition of art within the context of Madrid.

The chronology of Spanish political history does not correspond to that of most European countries. The break with modern tradition during Franco’s regime marks a difference with other countries that have lived that tradition as a continuity that, however, does have its parallel with the arrival of democracy to most Latin American countries at the beginning of the 1980s. The need for Spanish art in recent decades to seek and address traditions from abroad and from its own past, as well as from the comings and goings and trade from both sides of the Atlantic, is in line with today’s tensions caused by globalisation and implies a need to turn individual anecdotes into something universal and transferable. By letting things speak for themselves, we allow the link between works to proliferate cultural exchanges that build a shared idea of contemporary art.

The future of this Collection of collections must involve an enhanced effort to go beyond the politically conditioned factors of production, must incorporate lesser-known stories, must deal with the lesser-known channels of the great tradition that all this heritage is already qualifying and reshaping. What is the cultural value of an all-encompassing collection if it does not dismantle its hard-and-fast definitions, does not make its arguments more complex, does not exponentially increase the number of new artworks? This task involves taking naturalised narratives apart and developing a fundamental historical imagination, thinking anew together with and like the other, continuing to collect as the path to a shared future.