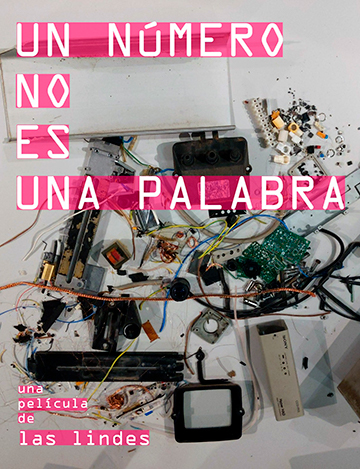 With the audiovisual “Un número no es una palabra” (A number is not a word) the Las Lindes collective is presenting fragments of the research and experimentation it has been carrying out over the last three years. A collective film (and not a film by the collective) which, over and above a diagnosis of reality or debating concepts whose excessive use has eroded their meaning, is an invitation to do and to make. A series of exercises that implement ideas, bordering on the absurd, to throw themselves into play and, as we have come to expect from Las Lindes, creating debate.

The public presentation of this audiovisual will be the beginning of a new phase for the collective. The goal of this project together with the consequences, changes, tensions and losses that the pandemic has caused in the collective’s fields of exploration—art, cultural production and education—have already begun to suggest and provoke new and different approaches. And not so much for our capacity to adapt as much as a case of resistance. We are still convinced that even today it is necessary to conceive forms and spaces from which we can think and act together, now more than ever.

In short, Las Lindes have made a film that we want to show you this coming Friday 25 September. Even at the risk of not being understood, it steers clear of commonplaces in order to create a place in common and to look for ways of talking that avoid the traps of language.