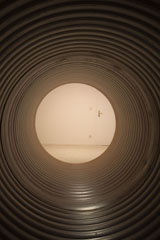 Gregor Schneider is a German conceptual artist also widely acclaimed as a sculptor. His most fundamental work is Haus u r (House u r), an old tenement house located in Rheydt, South of the German city of Mönchengladbach. Schneider was born in this house in 1969 and continues to live and work there. In 1985 he began to fill the building with a series of rooms that lent it an air of mystery. By doubling the number of walls and windows and adding new spaces, he invalidated the original functions of the rooms and transformed the living room, bedroom, storage room, kitchen, hallways, guest room and basement into new spaces with and without furniture. The moulds and replicas in his work convey the idea of death. Gregor Schneider’s rooms are copied, so to speak, from the real world and transferred to the fictional reality of art. In 1997 Schneider began to take these environments out of their original setting and display them in other sites, museums and exhibitions. His installation of the u r house for the German pavilion at the 2001 Venice Biennale was awarded the Golden Lion. Since that time, he has gone on to develop new spatial ideas that he has implemented at numerous other sites around the world.

In Dead End, Gregor Schneider’s project for CA2M, the artist has situated himself in a theoretical no man’s land at the point of contact between the vestiges of the traditional house that once occupied the site of the museum in Mostoles and the present building itself. Visitors wend their way through a vast, enclosed labyrinth of pipes that extend throughout the centre. The concept of his earlier rooms is shifted here to hallways and corridors that lead the visitor to disconcerting spaces that include environments lifted from the house u r and other projects. As is always the case in the work of Gregor Schneider, the complex he has created appears to have been original to the site.

The exhibition also includes videos and photographs of Totes Haus u r and other projects carried out by the artist.

It’s all rheydt. The spaces within Totes Haus u r gave a certain appearance of normality, but were, in reality, enigmatic spatial machines. They radiated a sense of abandonment, or became the settings of possible, or at least potentially possible, fictitious scenarios. For example, the living room was fitted with a mechanism by means of which it could be made to revolve, requiring the artist to warn visitors that they should leave the room cautiously to avoid tripping into a void. The basement housed Puff (a brothel) decked out with a garish red disco ball. Much more sordid was the Letztes Loch (The Last Hole), a pit excavated in the ground filled with puddles. The house’s most characteristic aspect was its unfinished state; none of the spaces were finalized and elements could always be added or eliminated. From 1997 on, the rooms of the house began to acquire a more definitive character as they were exhibited in numerous cultural centres and sold as works of art. However, Schneider replaced them with newer versions, a practice that progressively led him to adopt duplication as the guiding concept of his work. Although Schneider’s artistic spaces retain their authenticity, they are, in fact, simulacra. His goal is not the transmission of the ready-made aspects of the space, but rather the compactification of its respective spatial auras. The artist plays with our expectations by altering the elements and disposition of all the spaces he creates.

Gregor Schneider has developed other projects that have involved exterior spaces such as the open air reconstruction of a city street at the Kunsthalle in Hamburg (2003); a twin installation that made use of identical adjoining houses of the Schneider’s for Artangel in London (2004); Cube, a sculpture originally planned for Saint Mark’s Plaza in Venice but rejected by that venue and subsequently installed in 2007 at the Hamburger Kunstalle that echoed the form of the Kaaba in Mecca, and the series Weisse Folter (White Torture, 2007) created for K21 Kunstsammlung Nordrhein-Westfalen in Düsseldorf. In 2007 he also produced a grid of 21 identical cells on Bondi Beach on the eastern coast of Australia. In 2008 he installed END at the Abtieberg Museum in Mönchengladbach. Schneider designed an Indian version of the house u r for the Durga-Puja Festival in Calcutta in September 2011, a project that marked the first time the artist integrated the street fronting one of his house structures into his work.

Dead End, Madrid, 2011. Dead End, the project that Gregor Schneider has created for CA2M, can hardly be considered a study of tranquillity. It is essentially a corridor-tunnel bereft of the exit that visitors naturally hope to find. The artist has sited this new work at the architectural and historical crossroads of CA2M: the place where the new museum building constructed in 2007 abuts the walls of a much older building that have been incorporated into the new section of the arts centre where the auditorium is situated—the walls of a building that may have been very similar to those that stood in Mostoles on the day of the popular uprising that took place on May 2, 1808. Schneider has chosen the meeting point between these two incompatible buildings for his installation, following his motto ‘It’s all rheydt’ and once again using his house u r , which has served as a wellspring and workshop for so many previous projects, as a reference. The project has entailed sealing the habitually used entrances to the exhibition galleries on the first floor of the art centre. Visitors can only reach five of Schneider’s installation spaces by a series of large tubular passageways and fire escapes. The active journey visitors must make through Schneider’s labyrinth of tubular tunnels is radically different from the static quality of the four installations that await them.

As installed in Madrid, Dead End gives the impression of being an endless intestinal system, a system that follows its own inexorable logic and laws that lie at the margin of traditional museum architecture. Its critical strength lies in its dynamics, which flow out of the impulsion to move ceaselessly forward. Literature abounds with examples of systems of interminable tunnels and caves such as the tale of the caverns in Jules Vern’s A Journey to the Centre of the Earth and the short story The Tree on the Hill by H. P. Lovecraft. The cinema provides a catalogue of works that express the same tension, some best examples being Alien (Ridley Scott, 1979) and The Descent (Neil Marshall, 2005). However, whereas a film is mere fiction, art plays a role in our reality through its presence in physical space.

We find ourselves in a tubular passage whose true function has been subverted, trapped one might say, in the abstraction of its form. The form that Gregor Schneider gives to his spaces and passageways owes little to the influence of literature or cinema. As we have seen, Schneider’s modus operandi arises from the union of real elements in space through which he knowingly transmits his artistic intentions in sculptural form, although these works can be considered to verge on ready-made spaces.

PUBLICATION. A bilingual exhibition catalogue is published, featuring texts by Veit Loers, Ulrich Loock, David Moriente and Ory Dessau, as well as an extensive graphic documentation of the installation. The catalogue will be the first Spanish publication ever dedicated to this artist (download pdf)