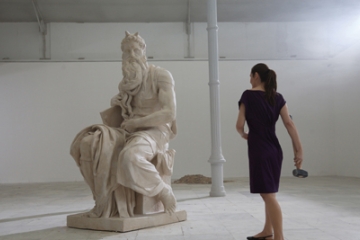 The exhibition Light Years. Cristina Lucas comprises videos, photographs, drawings and installations that serve as performative acts in which the artist herself, other characters, the spectator and even animals directly confront the symbols, myths and metaphors of defining moments in the western patriarchal domination. In her artistic praxis, the use of satire entails an ambivalent morality, which in turn overturns the historical victimisation of the visibility and social mobility of women in the public sphere. And yet the primary criticism in Cristina Lucas’s work lies precisely in the over-exposure and literality in the stereotypical representation of the meaning of misogynist signs and feminist agendas and genealogy.

For years, Cristina Lucas has shown an unstinting interest in obstructing and directly confronting the mechanisms of power, its institutions and the processes of subjectivisation that these generate, especially those that have collaborated in the historical hierarchy between the sexes.  In her work, the use of satirical narrative, fantasy images and dream-like settings always seem to lead the spectator to an ambivalent position in relation to how to produce an immediate judgement and reach a personal opinion about patriarchy, sexism, domestication and women’s ongoing battle to ensure that their representation in the public sphere is not limited exclusively to legislation but also embraces the cultural modification of societies.

Instead of deconstructing symbols, the videos, photographs, drawings and installations in this exhibition become performative acts in which the artist herself, other characters and even animals directly attack the social signs that have participated in inequality. But it is precisely in the over-exposure of the meaning of those signs and the literality of their representation that the artist vents her criticism.

The Cristina Lucas exhibition at the CA2M features a broad selection of the artist’s work, including videos, photographs, drawings and installations. In addition to offering an overview of her output in the last six years, it also features the latest pieces made specially for this show: Light Years and La liberté raisonnée . In the latter work, the artist borrows the pictorial image from the famous painting Liberty Leading the People and creates a video sequence in which the figures in the composition come to life. But instead of being celebrated as an act of emancipation, in Lucas’s video the depetrification of liberty becomes a tragedy.

Cristina Lucas (Jaén, 1973) lives and works between Madrid and Amsterdam, Holland. She studied at the Faculty of Fine Arts of the Complutense University in Madrid and at the University of California, Irvine. She was a resident at the Rijksakademie in Amsterdam.

Her most important individual exhibitions include Talk at the Stedelijk Museum de Schiedam, Holland; El Eje del Mal, at the Spanish Agency of International Aid (AECI) in Miami, USA; and Caín y las hijas de Eva at the Juana de Aizpuru Gallery in Madrid. Most noted among the group exhibitions in which she has participated are Eurasia. Geographic Cross-overs in Art at the Museo di Arte Moderna y Contemporanea di Trento e Rovereto in Italy; The Furious Gaze at the Centro Cultural Montehermoso in Vitoria; and Animation Adventure at the Museo de Arte Contemporáneo de Castilla y León (MUSAC) in León.