NACHO CRIADO. NOT THE VOICE OF ONE CALLING IN THE DESERT 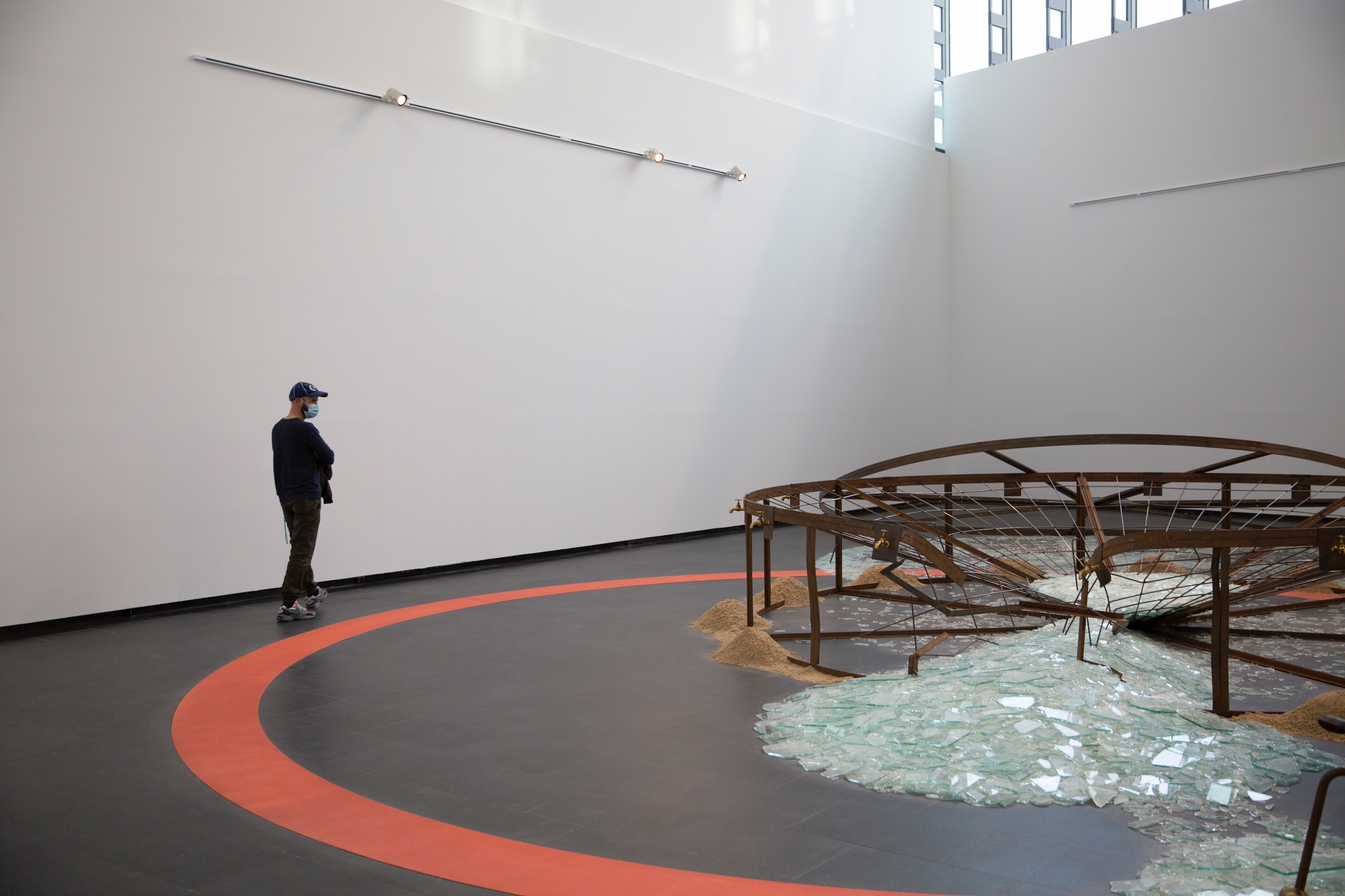 Picture: Sue Ponce. Nacho Criado. Not the voice of one calling in the desert. Javier Azurmendi, 1990.

One of the lines of work undertaken by CA2M is to revitalise the history of contemporary art exhibitions in Madrid. For this one-object exhibition by Nacho Criado, we focus on Madrid: Espacio de interferencias (Madrid: Space of Interferences), curated in 1990 by the art theorist and historian Javier Maderuelo (Madrid, 1950) for the Círculo de Bellas Artes. This exhibition, which was held from 9 February to 22 April of that year, featured an intergenerational group of artists including Darío Corbeira, Marcelo Expósito, Francisco Felipe, Gabriel Fernández Corchero, Juan Hidalgo, Concha Jerez, Eva Lootz, Sara Rosenberg, Adolfo Schlosser and Isidoro Valcárcel Medina. Maderuelo’s intention was to “present the current state of aesthetic ideas” in an exhibition that took into account the setting for the installation; in other words, the exhibition consisted of site-specific works created to fit the spaces in the Círculo de Bellas Artes. The catalogue stated: “An installation is, in essence, an interference in a space.”

The critical debate on which the project was based was a staunch advocacy for a new category within the visual arts: “a new independent artistic genre positioned on the same level of category as painting and sculpture.” The catalogue contained a text outlining the history of the experimental developments in sculpture in the mid-twentieth century that would give rise to the first settings or environments to host incipient installation art. The end of the catalogue provided a timeline for the history of installation art in Spain.

Also displayed next to each work were the sketches and documents explaining its developmental or assembly process, a "making-of", if you will. Maderuelo explained in the catalogue: “Here, the curator spoke with the artists and discussed the works on sketches and scale drawings, but without seeing the actual works until the opening day itself, so this exhibition entails a real risk, which is that of accepting works simply envisaged in the minds of the artists, and of working with dreams whose realisation could be problematic.”

No es la voz que clama en el desierto was the interference devised by the artist Nacho Criado (Mengíbar, Jaén, 1943–Madrid, 2010) for that exhibition. While Nacho Criado’s original piece was made by Jorge León at the Taller Hijo de José Vidal workshop in Valladolid, the one on display at CA2M is the reconstruction made for the retrospective of the artist’s work held in 2012 at the Reina Sofía National Museum and Art Centre with the title Agentes colaboradores (Collaborating Agents). The monumental installation of iron, sand and glass, inspired by the cupola in the ballroom at the Círculo de Bellas Artes, is an upturned dome that has become a well: fractured architecture that announces its own decadence, its destruction, but also the potentiality for meaning in the reorganised matter. Criado referred to the relational principle of influence as a “geography of affinities”. This exhibition proposes that this work, like all large installations, should create new affinities in CA2M's atrium, new readings of the building and unintended relationships in order to generate different forms of spatial governance for future exhibitions.

Essential works such as this are a reminder of the need to revitalise the many voices that make up the recent history of Spanish art. According to the art critic Fernando Huici, this work had a “mirroring duality between upward escape and abject collapse.” For the philosopher Fernando Castro, the piece belongs to a group of works he refers to as the “desert cycle”: “Nacho Criado presents a strange image of the oasis; like a place that has disappeared, a ruin in which no hope remains. ...Separate from the circular structure is a perforated metal chair, reminiscent of a tractor seat and with golden balls on the legs, as a reference to absence; it is not the place of the spectator, nor does it belong to the sculptor; instead, it belongs to an individual who has witnessed the process, someone who could corroborate the disaster, the reasons for the fall, but who – for reasons unknown – has left.” Through the viewer’s awareness of having arrived at the exhibition too early or too late – always at the wrong time – Criado delves into what the theorist José Luis Brea in 1989 classified as cold auras.

In an interview with Miguel Copón, published to mark his exhibition that was held at the IVAM in 1999, the artist himself explained: “The signs of the negative become present now: while the pieces possess a material memory – which doesn’t depend on the human factor, but to some extent is made to depend on their position – we also need to imagine that the pieces possess the ability to forget, one form that destroys the substance of all form, that blurs by working with the same strategies that a traditional design of forms would use. In this way, even the pieces that seem to be more sculptural in the traditional sense continue to retain the source of what has decomposed: the rust, the dirt, the sawdust, the formless or even the deformed. The pieces, in their circulation and breathing, contain an infinity of noises and murmurs; they are composed of haemorrhages that sets degradation against the order of the supposed objectivity of the bodies. The bodies of the works no longer oppose each other, but bleed, rot, fall apart.”

In a moment of respiratory crisis, it is essential to revive the breath of many voices, to relive the stories that make up the genealogy of the history of contemporary art here. Oral history makes it possible to give back to cultural productions a sense of history, the value of a time that is constantly being updated, settling the past in the present.

Nacho Criado is one of Spain’s leading artists of the second half of the twentieth century. He was awarded the Gold Medal for Fine Arts in 2008 and the National Prize for Visual Arts in 2009 and was the subject of a major retrospective at the Reina Sofía National Museum and Art Centre and the CAAC in Seville in 2013. He summed up his own career in the following way (Nacho Criado: Memoria, 1980. The document can be consulted at the Documentation Centre of the Library of the Reina Sofía National Museum and Art Centre, Madrid):

“After having expanded my work in the field of ‘minimal’ during the late ‘60s towards the ‘environment’ of the Tribute to Rothko exhibition (Galería Sen, Madrid 1970) in the early ‘70s, I considered types of creations that were more open in terms of outlines and working methods. Consequently, I would no longer think of it as a case of objects in development, but as ideas and attitudes in artistic processes. This would mean an apparent breaking down of what is usually called a line of work, but this ambiguity or dispersion would introduce two new elements: on the one hand, the real value of the idea and the project as opposed to the need for its realisation, and on the other hand, a greater reflection on the possibilities of ‘levels of application’ for these ideas and projects. The inevitable practice thus becomes an ideal area, equivalent to occasional situations and levels (the difference between idea and realisation). Given this awareness, the works of recent years would go from the written or spoken design to the complex structure of the ‘multimedia environment’, by way of alternative moments in which the work is devised over different levels of realisation (design, assembly, multiplicity or photographic documentation). After these associated activities and moments ascribed to the ‘conceptual art’, my works are currently taking two complementary directions: the event as an instantaneous idea, and the environment as events about an event.”

CA2M would like to thank Gonzalo Criado for collaborating with this exhibition and the Galería Formato Cómodo for their help in making this project a reality.