Earth 2052.
A beach without sea. Cartography of a future with no future.

Setting the Earth of 2052 in Benidorm is not a gratuitous decision. The Alicante town is the supreme example of the growth model that Spain developed through the second half of the 20th century. A model of sun and beach tourism that has turned Benidorm from a fishing village into a city of skyscrapers that now has half a million inhabitants during the summer. These holiday destinations have undergone accelerated growth over a short period of time. Enclaves designed in the late fifties to sell the idyllic image of Spain as a society of services, as a place of leisure and fun.

A Benidorm of cheap skyscrapers and swanky hotels, a Spanish version of Dubai and Hong Kong, is portrayed in the film as the Earth’s future, an oasis for the elderly. A paradise dying in slow motion. Las Vegas style, in a Mediterranean location for tourists with limited economic resources.

The film’s detective protagonist walks through a town that is difficult to place, a non-specific location designed for pensioners. We could be anywhere in the world, and yet we are nowhere at the same time. By never showing the sea, the tourist location takes on a rather delirious and claustrophobic dimension. Also, by shooting a summer city in autumn, it appears empty and gloomy, its skies overcast, its shops closed. The dance halls, the nightclubs, the streets crammed with neon lights and posters promising alcohol and revelry are only working at half throttle, staining the future of the Earth with a decadent and obsolete atmosphere.

The appearances of tourists and local people, acts as an anchoring and endearing counterpoint to the protagonist’s bloody and ruthless investigation. All those happy elderly people wandering the streets and cafes on motorised wheelchairs seem to be oblivious, unresponsive to the protagonist's murders, making the town look like an increasingly unreal and rarefied space. 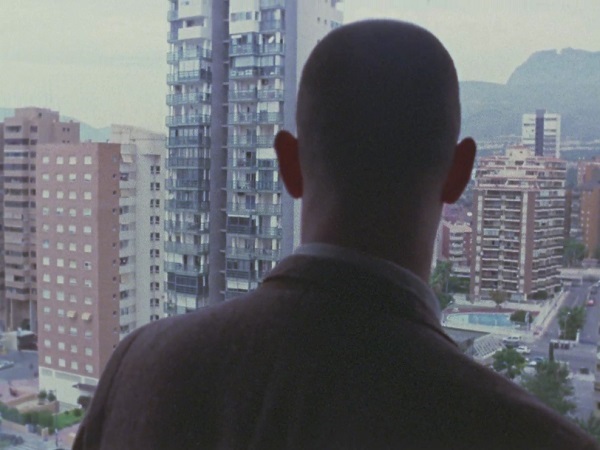