My Body, My Rules is an essay about the YouTube Challenge conceived as a mechanism for the body’s emancipation and for the democratisation of performance.

Dolores doesn't have the answer, and neither do I.

The representation of the body’s presence on social networks responds to the phenomenology of the use of the physical body in the digital space.
Everything is about intention and form.
We can all perform or establish body-space-object relationships that are divorced from convention.
Everything is absurd and necessary.
It is produced and reproduced. This is the Nowist Culture.
These are the rules, this is my body.

It is the moment where we encounter the otherness, the new equals who are also participants, where we decode the canons we have assumed, and spit them out:
Where we look at the objects once again, accepting bottles as new fossils or objects
for garbology, or the archaeology of the ephemeral.
We accept the shift from tradition to trend,
to be trendy,
to stop being trendy.

Colonial Amnesia is a set of several audio-visual pieces that present different cultural practices and social spaces manifesting our contemporary "amnesia" towards the colonial legacy, while also allowing us to discover how the colonial order renews itself and lives on, all at the same time.

Within this series, Colonial Amnesia (stupor) is a film constructed from sounds and images documenting the parade of the Three Kings in the town of Alcoy (Alicante), a Christmas tradition charged with an orientalist aesthetic in which blackface is practiced. The project is a sensory, hypnotic and disturbing film essay that addresses structural racism, colonial forgetfulness, whiteness and its modus operandi.

Since 1885, the Three Kings of the Orient parade through the town of Alcoy every 5th of January accompanied by hundreds of pages who hand out gifts to the children, surrounded by music bands, camels, torches and fireworks. The pages, also known as els negrets, are young men who dress up as uniformed servants, with their faces painted black and the outline of their mouths painted red. In the Alcoy festival, els negrets are not recognised as representing people of African descent, probably slaves, so the celebration that takes place does so completely disconnected from the meaning behind what is actually being represented.

In this festivity, Colonial Amnesia (stupor) explores other meanings that question what today appears to be innocuous due to its cultural acceptance and establishment, as well as the convenience of disregarding the other meanings behind what it represents. The piece proposes an immersive aesthetic experience that allows the viewer to connect with his or her own ethical and political considerations, exploring a state of mind, a suspended moment in time, a spiralling phenomenon. 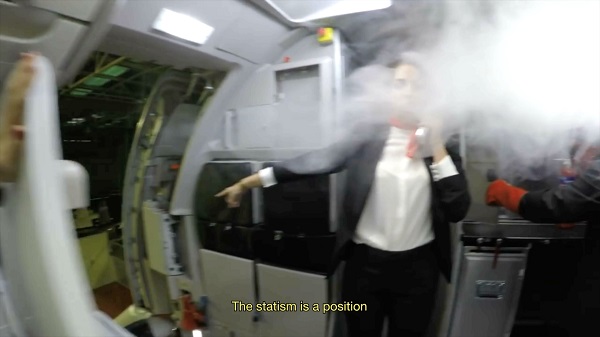