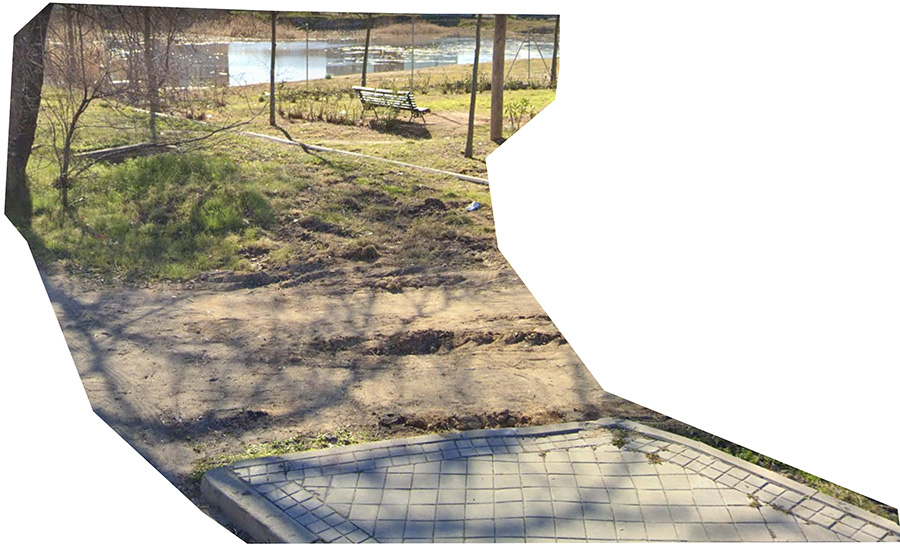 A pond emerges
A frenetic sprouting of the phreatic
An invisible flow
There are holes in the history of this pond and each one is filled in their own way
Dug out by a giant
A gigantic company, a gigantic machine, a gigantic desire
And then nothing can dry it, but it will evaporateIf you stop nearby, you can sometimes hear a choir of children from a nearby bilingual public school learning the song the water cycle…
When the children go back to school in September they are taken to the pond
They spend the morning sitting down, looking, they see that it is no longer there
They had visited the pond in February, collected samples of its crystal-clear water
And one evening in spring they went to listen to the frogs
An historian, a lawyer and an artist agree to start there.

Ciudad Sur is a shared experimental space begun in 2021 which, taking its starting point in Móstoles, wishes to explore the many faces and manifold riches that generate a sense of belonging in the cities within the metropolitan area of Madrid. Its second edition is called Brota invisible (Invisible Flow).

Brota invisible is aimed at all those interested in a shared rethinking of the inhabited space. Over the course of six sessions, spaced out between May and December 2022, we will explore the idiosyncrasy of Móstoles based on an omnipresent yet very often invisible element, which is water. Up until relatively recently, the people of Móstoles sourced their water locally, underground. This all changed when Móstoles connected to Isabel II canal water supply network. Taking our point of departure in this rupture, and all its ensuing implications, we will open the conversation. But there are also other elements in the various strata of the city that are forgotten about: the memory of those who are no longer with us and those that were silenced. And also the initiative of locals to decide how to build their own city. We will try to bring to the surface and throw light on some of these invisible flows, rivers that run underneath the ground we stand on, ponds that disappear and which, almost as if by magic, suddenly reappear.

The first session will take place on Tuesday 24 May and will consist of a walk which will start at CA2M at 6:00 pm. The following sessions will take place on 21 June, 27 September, 25 October, 22 November and 13 December. Each session will centre on this core theme as well as the interests suggested by participants. The enrolment form for the first session is already available.

AHIMOS (Amigos de la Historia de Mostoles, Friends of the History of Mostoles) is a relatively new association which came about with the purpose of investigating and promoting the past of this city in the Region of Madrid. Despite its newness, some of its members have been involved in these activities for almost twenty years, on a journey involving thousands of hours spent digging into archives and libraries, into excavations in search of treasure that nobody expected, of strolling streets and countryside to portray them as they are... and all with the goal of bringing the past customs, events and society closer to the local community today, in the hope that they will appreciate and feel a greater attachment to the place where they live.

Patricia Esquivias grew up in the suburbs on the outskirts of Madrid. Since she came of age she has lived in different cities, always searching in them for traces of local crafts and artisanship. Since 2005 she has mainly worked with video, a discipline she uses to share her narratives on history and the city. In 2016 she had a solo show at CA2M called “At Times Embellished”.

Carlos Copertone studied Law and obtained a PhD on the ways cities grow. In his teaching practice he literally proposed taking to the streets to explore and rethink them. All these approaches have gradually taken him closer to the field of architecture and contemporary art. He has curated various exhibitions and has also published books and is closely involved with Caniche, a publishing production and action platform outside conventional exhibition circuits that came into being in 2015.