CONVENTION ON THE USE OF SPACE 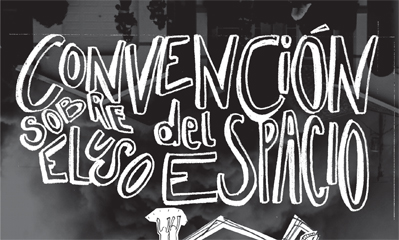 The Convention on the Use of Space is a legal instrument drawn up in the Netherlands between March and May 2015 as a response to the housing crisis: the lack of affordable housing, the absence of provisions for the undocumented, rising rents, and the criminalization of squatting. The Convention considers space as a “good” that should not be privatised for profit or be left empty simply for speculative purposes and it lists the uses in which squatting should be protected, like providing free health services, sharing knowledge and skills, occupying space in protest, for housing purposes, running cooperative systems for wealth and labour distribution, providing mental and physical support, or the taking of space in order to protect it from environmental destruction.

In June and September 2016 we are organising a series of public meetings in various spaces in Móstoles and Madrid in which the Spanish chapter of the Convention will be prepared. Paying special attention to the historic genealogy of the issue of housing in Spain and the subsequent development of legislation, the meetings will feature keynote speakers and will encourage the public to take part in drafting this legislation from the perspective of different movements. A translated version of the Convention on the Use of Space will be read during the meetings, after which it will be discussed and modified in close collaboration with local groups of activists, legal experts, lawyers and the general public. The meetings will be open to the public and all those interested in issues related with the use of space. To receive more information on the Convention and on the times and venues of the meetings, join the mailing list on actividades.ca2m@madrid.org

Between April and May 2016, a number of meetings were held at Cuarto de Invitados to work on the convention and its translation. These meetings, which included a small group of participants, examined the ways in which the convention is expressed, the implications of the language used, and the issues involved in translating it. In addition, based on the material compiled during each meeting, there was a shared reflection on the various concerns raised by the document in question. The first meeting was held on 23 April at El Cuarto de Invitados (Calle Mesón de Paredes 42, 2ºA, Madrid) from 11:00 to 14:00 and from 16:00 to 18:00.

WED 7 SEPT - ESKALERA KARAKOLA 19:00 - 22:00 (Calle de Embajadores, 52 Lavapiés, Madrid)
Article 12: If a space is occupied, how are the uses of that space decided?
In this session we will be taking a look at the Article dealing with issues of mediation and arbitration. If spaces are assigned in response to the principles agreed in the convention, how should they be assigned? How can disputes arising in these spaces be resolved?

The previous version of the convention underlined several questions and scenarios in relation with arbitration:

- If an empty space is occupied, how are the uses of this space decided?
- Are there uses in Spain that should be considered more important than others? Why?
- Are there successful experiences in assembly/collective decision-taking processes that can help to shape the structure for arbitration in relation to the convention?
- Or, should the convention be merely a document without rules for arbitration? If this were the case, how could conflicts be resolved?
- What are the possible effects of conflicts?

With the participation of:

Ana Méndez de Andés Aldama is an architect and city planner. She is currently an advisor to Madrid City Council’s Culture Department. As an architect and city planner she has worked on various landscape and urbanism projects in Amsterdam, London and Madrid and at different scales, ranging from general municipal plans to territorial strategies for the design of small urban public spaces. She has also taught city planning in Madrid and Shanghai, and has coordinated workshops and symposiums on issues such as urban commons, public spaces, strategic cartography and a radical democratic municipal project, at various universities and cultural institutes. She has taken part in research projects including Areaciega and Car-Tac, and is a member of the Observatorio Metropolitano in Madrid.

Lotta Tenhunen is an activist in the right to housing movement and a researcher.

Jacobo García Fouz graduated with a degree in set design from RESAD in 2014 and produces new models and spaces for performance. He is one of the driving forces behind the community co-management project El Campo de Cebada, winner of many awards for the public space. He has created construction and design projects for stages for many theatre companies. He has also designed and built urban fixtures for different projects, collaborating with architecture and art collectives such as Zuloark.

THURS 15 SEPT - LA HIDRA 19:00 - 22:00 (Carrer de Sant Vicenç, 33 Sant Antoni, Barcelona)
Article 13: What kind of mutual support structures can guarantee the sustainability of networks?
The questions raised throughout the meeting have to do with the material maintenance of spaces, with caretaking and the possibility of generating support networks among signers of the convention. In this regard, how can we create a support network that will help to maintain housing/buildings, and how can we proportion mutual support for temporary housing? Buildings get run down if their users do not look after their maintenance, and in the majority of cases occupiers prolong the life of buildings. And while these repair and maintenance operations are normally carried out by the occupiers of the buildings, this excludes the possibility of these spaces housing people with different capacities, given the impossibility of carrying out repairs independently, and is this a problem?

Some of the questions raised:
- If the convention operates outside normative channels of external funding (bank, state or subventions), then how can the members avail of a safety net of some kind?
- What practices of sustainability/maintenance should be specified in the Convention?
- How should the mutual support be managed, what are the parameters for this support and how are they decided?

Rubén Martínez specializes in the relationship between social innovation practices, public policies and new community economies.Between 2002 and 2011 he was founder and co-director of YProductions, a company focused on the political economy of culture. He is co-author of books such as Producta50: una introducción a las relaciones entre economía y cultura (CASM, 2008), Innovación en cultura: una genealogía crítica de los usos del concepto (Traficantes de Sueños, 2009), Cultura Libre (Icaria, 2012) and Jóvenes, Internet y política (CRS, 2013). He has given papers at international symposiums and congresses on public politics and community management including Latin America Commons Deep Dive (Mexico City, 2012) and in European research groups like P2P Value and TRANSGOB. He is currently finalising his doctoral thesis on politics of social innovation at Instituto de Gobierno y Políticas Públicas (IGOP). He is also a member of Observatorio Metropolitano in Barcelona.

Manuela Zechner is a cultural activist and founder of the Future Archive project. She has a PhD in Precarity and Networks of Care in the European Crisis, from Queen Mary University of London; an MA in Visual Cultures from Goldsmiths University London, with a thesis on Subjectivity and Collectivity in Foucault and Simondon; and a BA in Fine Art Media from Chelsea College of Art. She works across relational methods (Theatre of the Oppressed, Somatics, Choreography, Writing), research methods (mapping, performative interview, co-research, militant research) and audiovisual production (radio, video). Her main projects are Future Archive (2005- ), Radical Collective Care Practices (2012- ) and the radio show The Sounds of Movement (2012- ) and Vocabulaboratories (2007-2009). She is active in various collectives, including the Nanopolitics group (2010- ), the Centre for Ethics and Politics (2011- ), the Kamion jounral (2014- ) and la Electrodoméstica (2014/15)