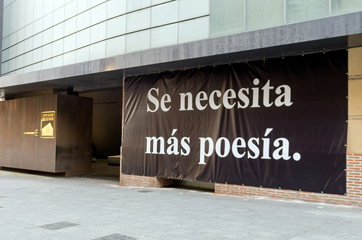 Aimed at artists, Fine Arts students, and at anyone interested in Jeremy Deller's work.

The meeting / workshop will be run in English.

Registration is open up until the 21st of April. Download the form and send it to actividades.ca2m@madrid.org.

Jeremy Deller approaches signs, images, lifestyles and objects in order to reflect on the mechanisms and the culture that define our current post-industrial society. With a background in Art History, his methodology is not so much defined by a specific artistic procedure, but by turning observation, research and critique into his tools, premised on his curiosity.

Coinciding with the exhibition "The Infinitely Variable Ideal of the Popular", Jeremy Deller proposes a workshop/meeting where to establish a dialogue and exchange impressions on his work and his methodology, as well as to open up a space for the discussion and exchange of criteria among the participants. The artist will also lead a visit to the exhibition, as well as to the piece Sacrilege, set up at El Soto park, in Móstoles.

Jeremy Deller (London, 1966) lives and works in London. He studied Art History at the Courtauld Institute of Art, University of London. He won the Turner Prize in 2004, and in 2010 he was awarded the Albert Medal by the Royal Society of the Arts. Even though he works with a variety of media, such as video, sculpture, and visual art, his work has had an emphasis on collaborative projects, re-enactments and public art, on the basis of which he poses a reflection on post-industrial English popular culture.

Some of his most relevant projects include: Acid Brass (1997), Folk Archive (since 1999) in collaboration with Alan Kane, The Battle of Orgreave (2001), Procession (2009), and Sacrilege (2012), among others. Some of his most notable exhibitions are: English Magic for the British Pavilion at the 55th Venice Biennale (2013), the retrospective Joy in People, Hayward Gallery (2012), Carte Blanche à Jeremy Deller, Palais de Tokyo, París (2008). In a similar manner, he has developed some notable curatorial projects: All That Is Solid Melts Into Air (2013), The Bruce Lacey Experience (2012), and British Council Collection: My Yard (2009), among others.