GENEALOGIES OF PUNK, POST-PUNK AND AGAINST PUNK

ONE FANZINE A DAY 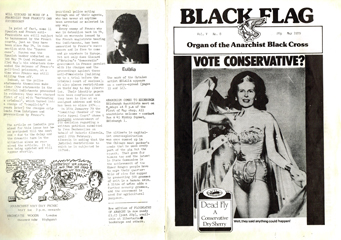 In 1979, shortly after the date established by Malcolm McLaren as the beginning of punk, a pioneering essay by Dick Hebdige was published, Subculture. The Meaning of Style. In this text, contemporary to some of the movements he wanted to study, Hebdige adopted the methodology of Cultural Studies, which breaks down the hierarchies that separate High and Low Culture, in order to examine how the Post-World War II subcultures in Great Britain had been born, and to define the strategies they had followed in opposing the established order. Hebdige's outlook partly differed from that other, romanticized and nostalgic one, which some later authors projected on their particular constructions of punk and its antecedents, and took up the notion of conflict as a starting point in his analysis.

It was a case, first of all, of a class conflict, since all these movements - the Teddy Boys, the rockers, the mods, the skinheads and the punks - appeared among English working class youths, who were resisting the limitations imposed on their own class, as was the case, especially, with the elegant mods, or the ideals of the middle class, and as, eventually, was the case with everybody. The development of these groups also involved a racial conflict, since they were formed by white people, and were opposed to the subcultures developed in those years among the Afro-British population (even though the later would sometimes be their very base), as was manifested in the confusing relationship between the first wave of punk and the Rastafari movement in the West Indies. Nevertheless, Hebdige ignored another conflict - that of gender - which would reveal itself later, with the texts of Angela McRobbie, who would ask herself about the role played by women in the development of subcultures, the riot grrrls, and the re-appropriation by homosexual collectives of some of the resources used by punk.

In the search for a genealogy of these subcultures, Hebdige traces out links between these groups that would break away from the norm and the avant-garde of the late nineteenth century and the beginnings of the twentieth century, based on the importance of style for them, as something significant, and the consequences that this had in how they used objects, decontextualizing them and turning them into symbols of dissidence. These tactics used by subcultures lead him to work on the notion of bricolage, which, generalized and simplified, could be extended to the use of assemblage, collage, and DIY by punks and other subcultural groups.

In this selection of recent books, magazines, and fanzines, self-published, or released, in their majority, by independent publishers, we have assumed some of the aspects mentioned in Hebdige's essay. On the one hand, we have tried to trace out a history, brief and incomplete as any other, of the subcultures that came before punk, or that appeared at the same time, taking up as a departure point the figure of the dandy, and pointing out its links to the historical avant-garde. On the other hand, we have included editions that revise the publications of the punk movement, and some of its most relevant figures. We have also attempted to show how some current artists contemplate this movement, and what followed it, what has been termed post-punk. He haven't included only nostalgic projects, something we know is over and can never be recuperated, but we have also looked for other publications, that analyze punk with anthropological detachment, or question it from a feminist and queer vantage point.

Sergio Rubira is a Lecturer in History of Art at Madrid's Complutense University, and Academic Secretary of the Máster in Contemporary Art and Visual Culture, UAM, UCM, and Museo Reina Sofía. He is an editor at EXIT magazine, and a contributor to El Cultural de El Mundo.