SEMINARS ON MÓSTOLES, CITY IN TRANSITION 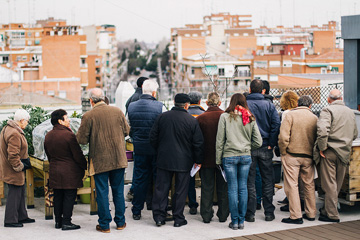 The core element of a proposal for global change is the idea of cities in transition, a change led by people who wish to respond with practical solutions to the big challenges of our time, like climate change, peak oil, and the socioeconomic crisis that seems to have become a chronic illness. We will look for a third option somewhere between the ecologically impossible fantasy of perpetual growth in a finite planet, and the perspective of the collapse of industrial society increasingly predicted by scientific reports. We call this third option creative decline.

In addition, we understand that the challenge of sustainability is a good opportunity to plant the seed of a more just, participative and fulfilling society. Since eight years ago, the Rompe el Círculo Institute for Transition has been working towards implementing the philosophy of movement in transition in the city of Móstoles. We hope that these seminars will mark a point of inflection on the road towards a model of city geared towards the enjoyment of the good life, within the reach of everybody, bearing in mind the limits of a finite planet. The idea behind Móstoles, City in Transition is to live better with less.

MONDAY 18 APRIL. 19:00
CA2M
The Limits of Growth.
Jorge Riechmann and Emilio Santiago
Our expansive economic systems are already beginning to clash frontally with our planet’s biophysical limits. In fields such as climate, energy, water and biodiversity, we are facing an authentic planetary state of emergency. This seminar will take a look at key scientific evidence for a proper understanding of our time. Jorge Riechmann is a lecturer in moral philosophy at UAM, a poet, translator, environmental activist and one of the most important figures in eco-socialist thinking in Spanish. Emilio Santiago is a social anthropologist who has penned the books No es una estafa, es una crisis (de civilización) and Rutas sin mapa (winner of Catarata 2015 prize for essays).

TUESDAY 19 APRIL. 19:00
CA2M
Ecofeminist gazes on the crisis of civilization
Marta Pascual
This session is conceived to introduce us to the main ideas of ecofeminism, and to help us to better understand the way in which a project of transition must also be a project of liberation with regards patriarchal structures. Marta Pascual is the coordinator of Ecologistas en Acción’s education section. She is also the co-author of, among others, the books Cambiar las gafas para mirar el mundo and Ecología y Educación.

WEDNESDAY 20 APRIL. 19:00
CA2M
Engaging with movement in transition
Juan del Río
Movement in transition is one of the most interesting responses that have arisen to confront the crisis of civilization. Its central idea is that the energy decline is an opportunity to move towards a longed-for reality, and that the best way of addressing it with hope is through advances in local self-governance. Juan del Río is a biologist, educator, author of the book Guía de la Transición and co-founder of Red de Transición de España.

THURSDAY 21 APRIL. 19:00
CA2M
The Limits of Renewable Energies, under debate
Antonio García Olivares and Pedro Prieto
A sustainable future must be a future based on renewable energies. But there are fundamental doubts on the type of society that can be sustained by renewable energies. This session will feature a debate between two of the leading experts in Spain on this issue, who have also publicly defended differing positions with regards the compatibility of renewable energies with the modern way of life. Antonio García-Olivares is a physicist and sociologist, a member of CSIC and of the Crash Oil Observatory research and outreach collective. Pedro Prieto is an engineer, vice-president of AEREN (Association for the Study of Energy Resources), who has spoken widely on Peak Oil and is the editor of the Crisis Energética web portal.

TUESDAY 19 APRIL. 11:30
Roof terrace garden
We are largely unaware of the huge potential to grow our own food at home and the pleasure of eating food we have grown ourselves. In this workshop we will learn the basics on how to grow food in small spaces, like a balcony or roof terrace.

WEDNESDAY 20 APRIL. 11:30
Energy Efficiency
Our houses are designed to use lots of energy. This workshop will teach us tricks on how to reduce our electricity bill while at once contributing, from the domestic realm, to a more rational use of energy.

THURSDAY 21 APRIL. 11:30
Solar Cooking
Cooking with solar energy is easy if you know how; especially in a country like Spain. In this workshop we will build our own solar kitchen to cook effortlessly without consuming energy, thanks to recycling common materials.

All practice sessions will be held on the CA2M roof terrace

FRIDAY 22 APRIL. 11:30
CA2M
Visualisation of Móstoles in 2030 [participative community education]
This participative initiative will endeavour to collectively imagine Móstoles in 2030. We will do so under the hypothesis that Móstoles will have become a place in which energy consumption has declined as an obligatory condition for living full lives.

FRIDAY 22 APRIL. 19:00
ROMPE EL CÍRCULO
Presentation of the journal 15/15\15
Manuel Casal Lodeiro
15/15\15 is a journal conceived to support the construction of a new post-industrial, post-capitalist and post-growth civilization. The presentation will showcase some passages from issue zero, focused on stories that reflect different aspects of life in 2030. Manuel Casal Lodeiro is author of the book Esquerda ante o colapso da civilización industrial, a member of the Galicia-based collective Véspera de Nada and editor of the journal 15/15\15.

ROUNDTABLE ON THE ÚLTIMA LLAMADA MANIFESTO

SATURDAY 23 APRIL. 18:00
FINCA LIANA PUPPET THEATRE
The Challenge of Sustainability in Political Change
Signed by key political figures in Spain, the Última llamada manifesto was published in Summer 2014. Its goal is to warn people of the pressing need to place sustainability at the centre of political change in Spain. However, left-wing parties have lent scant importance to the challenge of sustainability. To respond to these and other questions, the roundtable has invited leading representatives from political parties to debate the Última llamada manifesto: Teresa Ribera (PSOE), former Secretary of State for Climate Change (2008-2011); Florent Marcellesi, MEP for EQUO; Juan Carlos Monedero, founder of PODEMOS; Sol Sánchez, member of parliament for Unidad Popular [to be confirmed]. The roundtable will be moderated by Margarita Mediavilla, physicist at the University of Valladolid and a member of the group promoting the Última llamada manifesto.