VASTER THAN EMPIRES AND MORE SLOW 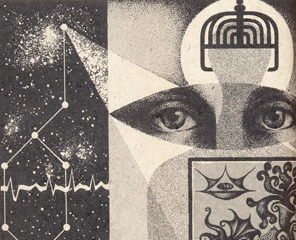 The only requirement to take part is to have read the books before each session, and to attend with a participative disposition. The group will be moderated by Tamara Díaz Bringas

You’re looking at a clock. It has hands, and figures arranged in a circle. The hands move. You can’t tell if they move at the same rate, or if one moves faster than the other. What does 'than' mean?

The crew of the ship Gum –a nickname meaning something like “pet”– is sent to outer space to gather information on unexplored worlds. One of the scientists on board has a special gift, a talent for "wide-range bioempathic receptivity", which allows him to pick up emotions and perceptions from his surroundings. When the group lands on a distant planet on which there seems to be no life forms, they are faced with unexpected events and mysteries in which empathy proves critical. Vaster Than Empires and More Slow by Ursula K. Le Guin will be the starting point for the reading group which will now focus on science fiction.

To give ourselves time, to take time on fiction stories that participants in previous reading groups wanted to share. The first group came together at the end of 2014 with an invitation to Saber con quién se trata (Know Who You are Dealing With) from Bulegoa zenbaki barik, the art and knowledge office located in Bilbao, which proposed a programme of readings on different agreements, contracts and relationships that define our everyday life. The participants in the opening experience played with and transformed the initial programme, and between 2015 and 2016 we opened up a new phase that expanded our desire for collective reading and experimentation. The second group, called El cuerpo como archivo (The Body as Archive) asked itself, among other questions, about the body as a political and cultural archive and technologies –legal, medical, architectural, media– for the production of the body, gender, sexuality.

Although a large part of our reading is based on essays, science fiction has also crossed our paths on numerous occasions. For instance, Albert Meister’s La soi-distant utopie du Centre Beaubourg (1977) argued: "the only way to reject the system is to ignore it, to deny it. Not against it, but beside it, creating a parallel universe, the parallel space-time continuum of science fiction". Or the inspiring political and multi-species history fictions of Donna Haraway that, as she herself as said, have their stem cells in the creators of science fiction.

In this third season of the reading group scheduled over ten evenings between February and June 2017, we will take our starting point in stories by Ursula K. Le Guin and Octavia Butler, as well as Ted Chiang, Clarice Lispector and Macedonio Fernández. Similarly to previous occasions, our meetings will ultimately be shaped by the affinities and derivations of the group. Without any given destination, we instead propose to collectively gift ourselves the stores we deserve, the time we deserve and perhaps along the way we can also gift ourselves tools for the worlds we wish to inhabit. We might spend three to five sessions on one single story or we could read a different one for each session. In any case, we will strive to stroll leisurely towards the unexpected. And more slow.