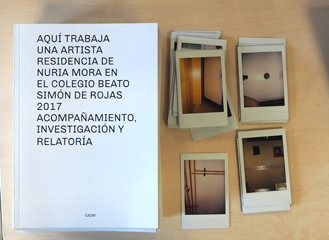 This publication is the outcome of the work undertaken in Artist at Work, CA2M’s art residency programme in schools.

It is the result of the research and an account of a project that lasted almost three months and 20 sessions at the Beato Simón de Rojas school in Móstoles, with the guest artist Nuria Mora and the rest of the team at the museum’s education department.

The project focused on the creation of a secret society and on carrying out artistic interventions in different spaces within the school. As part of this plan, lots of conversations, dynamics, disillusions, discoveries, tensions and negotiations took place which are described and analysed throughout the publication. The construction of the joint creation was the leitmotiv for the workshop. In it, Nuria Mora and the educators suggested to the students in 1st and 5th class the idea of setting up a secret society, paying particular attention to all the details the participants believe to be important. The way in which the society was created and the plan they implemented at school provided us with the scaffolding for a long-term workshop that will be developed annually together with the Beato Simón de Rojas school, which is the closest school to the museum, and one of the top priorities in its policy of collaborating with local educational institutions.

A series of unusual signs, installations, marks and messages began to appear around the school, but the perpetrators did everything possible to ensure that the secret society remained exactly that, a secret, and to prevent the rumour spreading that Los 7 Lobos and their group of helpers had been founded and were beginning to act. Despite all efforts, the rumour spread like wildfire around the school, to all the different classes, to the teachers and to families, becoming a basic educational and artistic tool, just as Ulises Carrión had already explored in the 1980s in his project on rumours.

Rumour and the fiction it gives rise to play a major role in this artistic and educational project because of their subversive potential insofar as they are shaped organically and transmitted orally.