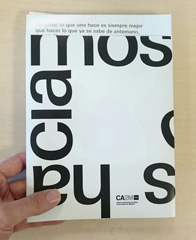 We didn't Know What We Were Doing

Readings on Education
Presentation of publication by CA2M Education Department

After several failed attempts, we can finally announce the presentation of We didn’t know what we were doing. Readings on education, a publication explaining some of the practices developed for and by CA2M’s education department. The delay is owing to the fact that it is never easy to portray oneself, to explain yourself to yourself, and for that reason we have taken almost two years to put this book together, which is no more than one possible narrative of the path we have taken. This publication compiles not just texts, but also a good number of group dialogues which bring into play a way of working that understands dialogue, constant research, experimentation and investigation as the basic pillars of educational work. Together with several essays written by members of the department, it also includes texts by various agents who have collaborated in the construction of the different projects undertaken by the department, as well as the consolidation of a work that cannot be other than collective. The publication contains reflections on queer pedagogies, the role of education in the art institution, performative practices in education, and the role of the body or the museum as a space of control. The book is divided into three broad but interconnected sections which speak about the inside-outside of the institution as a space for the construction of a new institutionality; the interior of the museum as a space of control and response from pedagogic experimentation; and the relationships between museum and school, the grand alliance of innovative education.