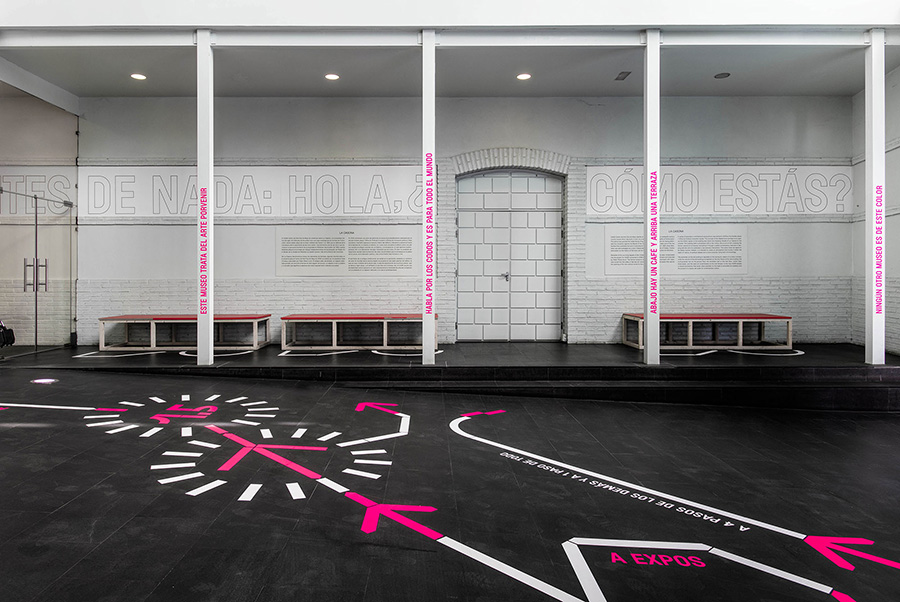 CA2M Centro de Arte Dos de Mayo, the Region of Madrid’s contemporary art museum, has revamped its interior with the aid of Murray Branding & Design. The idea behind the museum’s new signage is to clearly convey the new protocols for social distancing. And it does so with a system that goes beyond the usual simple instructions and takes over all the museum’s spaces for circulation. With this end in mind, it conceived a visual and verbal language that helps to interiorize the new rules for circulating and interrelating, turning what is otherwise compliance with health and safety rules into a participative choreography.

CA2M has built a reputation for attracting a whole host of varied publics and audiences who are accustomed to using the liminal spaces scattered about the museum. That’s why, rather than the usual administrative language the situation would seem to call for, CA2M responds to the temporariness of the emergency by maintaining an open, welcoming spirit, and responding to the following questions: How can we design COVID signage systems that question the meaning of social distancing, its connotations and the way in which bodies interact in public spaces? How can we steer clear of the imperative tone and the omnipresent separating stripes we have got so used to over the last few months? How can we generate a friendly, caring, navigable and playful place which also makes us think?

In a text published on the museum’s website at the end of the strict lockdown, Manuel Segade, the CA2M director, called for the need to reverse the recent process of digitization in our relationships and the disappearance of any possibility of bringing our bodies together, underscoring the need to build new rituals and new circuits that will enable us to form new relations in which the sustainability of life is not necessarily at odds with the pleasure and enjoyment of a place at a different pace to everyday life. The result of the new signage is a geometric modular system built with two different fonts, two different materials and two axes of information: horizontal (walkthroughs) and vertical (messages on paper).

The horizontal axis (walkthroughs) is created by a “playful game of open forms” that sets out the distance of 1.5 metre, which also references the project set in place at CA2M during lockdown (#unmetroymedio). This geometric modular system is based on the glyphs of the two styles of Galapagos (Dinamo) font, which Murray “dismantled” in order to recompose a universe of forms and variations that outline paths, messages with guidelines for social distancing and a whole family of personalized icons.

The second layer of communication is the vertical axis which comprises big messages on large format pieces of paper pasted over the museum’s vertical surfaces: columns, walls, staircases, etc. For these large areas Murray opted for the Plaak font because of its “elementary, clear and robust forms” which are then "softened" when applied in outline.

The new system blends in seamlessly with the museum, creating a spatial language in the different walkthroughs which is not perceived as a barrier but helps to consolidate new perceptions and forms of relating with others, with the artworks and with the different spaces.

The new signage was produced and executed by Global World Consulting and mounted by Giroscopic.

Murray is an independent branding and design agency founded in Madrid in 2004. Combining talent and a critical gaze, it believes in clear messages and straightforward interaction. They are guided by passion, thoroughness and ambition and are highly demanding when it comes to turning the potential of ideas into real achievements, using their own tools, skills and processes. Their work has been featured in design magazines and books and has won many awards both here in Spain and worldwide.